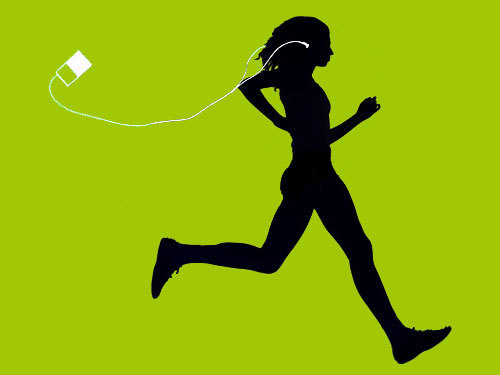 I’ve been noticing a trend on my local trails and wondering if it’s a “thing”. More and more runners are ditching their headphones and just running with music streaming out of their phones. I’m more or less a “live and let live” kind of guy, but I have to admit, it’s kind of irritating sometimes. Anyone else seeing this? Thoughts?

Yep. I’ve learned to just ignore it. I usually only get cranky with it if someone’s doing that in a race, and I’m stuck in a conga line behind that person in a spot where it’s very difficult to pass. I had such a moment during the Pikes Peak Marathon one year. I’d say maybe two miles of that climb were fueled by rage because of the guy ahead of me playing his music very audibly.

Using external speakers in the wilderness is a newer thing and I highly dislike it, especially in races where lots of runners are around. If it just some random person in the middle of nowhere that I happen to come across, no big deal. But not in congested areas.

Strongly dislike this. I tried running faster then slower to get away from a county music lover blasting her music at a 100k race. I finally just walked for 15 minutes to let her pass so I wouldn’t have to listen to it anymore.

One of the biggest reasons I love trail running is because it’s a break from all the noise. I hear the birds, leaves crunching underfoot, animals, etc. Why ruin that with music?!

I wear headphones at the gym or when I’m road running, but never out on the trails. It just seems to zero out the best part of being out there.

I always turn it down/off when approaching others. Also I’ve never done this during a race except for the last five miles of Bighorn which is on a boring road and people are typically spread out (and again I always turn it way down or off when passing or being passed in that situation).

I’ve noticed it once or twice. It’s usually on a trail that doesn’t have much traffic and the person has the music blaring. It doesn’t bother me but I can see where it can bother those that like to run in quiet. I always have my headphones and the music low enough where I can hear it and I can still stay fully aware of my surroundings. I guess it’s a safety/ defense strategy?

I run with music playing, doctor told me NOT to wear earbuds. Issues, not gonna stop listening to my music because of it! Sorry if it’s offensive, I typically spend my time running solo!

I’ll do it if I’m running in an area that is unsafe or at times when the light is low, especially when I’m by myself. I’d rather know my surroundings and possibly disturb a runner for a minute (I’m slow, you pass my quick), then get assaulted or eaten because I wasn’t aware of my surroundings. I’ve done it a couple times on city streets and urban trails when I left my headphones at home by accident. But on the city streets and urban trails there isn’t any solitude anyways.

You can get your own piece of land and run on that in peace. But when you go into PUBLIC spaces its PUBLIC and people have just as much right to do what they want as you. So for all those complaining that its a rude intitled inconsiderate thing to do……go buy your own private land and stop being a whiney ass 😂😂😂😂

I like headphones, but i don’t listen to music generally while running just books on tape or podcasts so it would be a pain in the ass to try to do that over speakers, without ear buds i’d be lost!

I run with music going. It’s loud enough to hear and scare off wildlife but not blaring such that someone would hear it in the distance. And, if you do hear it, that’s probably cause you’re not moving over on a single track trail. I can hear better around me than being plugged into earphones. But if I come up to other people on the trail I usually turn it down.

It’s about safety I run with only one earbud. It’s been said time and time again earphones block out your awareness for your surroundings it’s very dangerous I ve accidentally scared people walking with headphones when I run by , they don’t hear me coming ..

I do it. I prefer to hear what’s going on around me. That being said while trail running. In the many years I have been doing it I have run into 2 people on the trails.

I run the trails to get away from these kind of things. I don’t mind others using headphones but the one who are entertaining everyone else with their music don’t really care that other runners find this to be noise pollution.

Had someone in a 10k race blaring sports talk radio. Had to gap him it was bringing me down. I don’t listen to anything other than my thoughts and I do 2000 miles a year just fine.

I once said it was the most annoying thing ever — then I came face to face with a huge hog during dusk at a 100k. I quickly became “one of those” people at dusk and dawn simply to scare away aggressive wildlife.

I run in a county that had two runners mauled by bears in the span of a year. If I’m by myself I play the music cause it’s more tolerable to me than bear bells. When I meet a person I turn the music down to inaudible. Run your own run.

I can’t keep headphones in when I run. I have some clip over the ear ones but then my ears get sweaty! So I have to say I play mine without. But quietly and not v often, just when I’m nearly home and getting tired to try and motivate me!

I would never do it at a race or if the trails were crowded, but I do play my music out loud, but so that only I can hear it. I turn it down if I see someone, too. Frankly, I would rather be safe than annoy someone for two seconds if I pass them. More often than not though, I use one headphone so I can still hear what is going on around me. I just don’t like to wear headphones in the rain.

How is playing music out loud at a reasonable volume any different than conversing with a running buddy? I’m not sure I understand the issue. Blaring music or a podcast loudly, sure, but if it’s not loud?…

The issue I have is that some of the trails I run are in designated wilderness areas, so amplified music of any sort is banned. Yet people still do it. Another issue is that depending on the trail, the music drifts upward. So I had to spend over 20 minutes listening to crappy music from a guy who was below me on a trail.