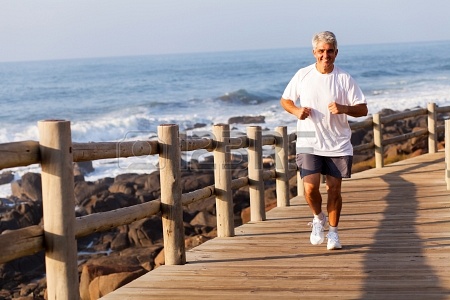 Recent studies are shattering the myth that life span is predetermined by genetics. The latest bombshell: your morning run could be the fountain of youth. PICTURE TWO MIDDLE-AGED MICE, born at the same time. One suffers from gray hair, shriveled muscles, and creaky joints. He’s a pint-size Wilford Brimley. The other mouse, meanwhile, looks healthy and young—Jack LaLanne in his fifties. Why the contrast? While the geriatric mouse lived a sedentary life in his cage, his younger-looking contemporary literally outran the effects of aging.

That’s the groundbreaking conclusion reached by a team at Canada’s McMaster University. The scientists, who were looking at the impact of exercise on aging mice, found that a lifelong endurance regimen may help your body look and perform younger than its age. “Three times a week—not a lot of exercise—caused a complete reversal or arrest of all the symptoms of aging,” says study co-author Simon Melov, director of genomics at California’s Buck Institute for Research on Aging. “It was an extremely dramatic and novel result.”


The findings add to a growing body of evidence contradicting the long-held belief that the pace and effects of aging are hardwired into an individual’s genetics. In another recent study, published in the Journal of Internal Medicine, researchers who examined 855 men born in 1913 found that hereditary factors didn’t play a significant role in determining a person’s life span. “If you ask most doctors, ‘What do you believe is the most important factor for living long?’ it would be to have old parents,” says the study’s author, University of Gothenburg professor Lars Wilhelmsen. “But we couldn’t find that.” In other words, even if you’re 35, the lifestyle choices you make right now may determine not only how quickly you age but also how long you live.

Research on aging has come a long way, yet scientists still aren’t sure what causes our bodies to morph into saggy, broken-down vessels. One theory is that aging is caused by the cumulative effects of random genetic mistakes—distortions in the genetic code that take place as cells reproduce billions of times during a person’s life.

Of all the accumulated errors, mutations in mitochondria are thought to have the most significant effect. Those are the tiny parts that fuel a cell’s individual function—be it a muscle cell contracting or a liver cell digesting a can of PBR. In older people, the theory goes, mitochondria have collected so many genetic screwups that their energy production is stunted, which could be what causes hairs to go gray, skin to sag, and muscles, bones, and brain tissue to shrink. This is why Melov and co-author Mark Tarnopolsky’s findings are so intriguing. In their study, the active mice performed a moderate 45-minute run just three times a week from the rodent equivalent of age 18 to about age 50. When they were autopsied, their cells were full of healthy mitochondria. “It wasn’t just the muscles,” Tarnopolsky says. “Every other tissue, from the blood to the brain to the heart, was better.”

There are signs that exercise might have the same effect in humans. When scientists at England’s Newcastle University biopsied the muscles of veteran athletes and veteran couch potatoes, they discovered the athletes had fewer mutations in their mitochondria.

The next step is determining exactly how exercise triggers the production of healthy mitochondria—and perhaps developing a pill that could replicate the process. But why wait for Big Pharma?

“We’re never going to approach the elegance of nature with a pill,” says Tarnopolsky. “We evolved to run. We evolved to be active. Get your mitochondria out for a run and you might live longer.”

Age-Old Wisdom
There’s no avoiding aging altogether—at least not yet. But in addition to regular endurance training, these three promising habits may extend your life span.


Cut your calories. The evidence is strong: in studies of everything from flies to primates (but not yet humans), animals that ate less—30 to 50 percent of their normal dietary intake—lived longer than those that did not. It’s not just about keeping the weight off. Even obese mice bred to stay fat, when given low-calorie diets, lived longer than obese mice eating normally.

Boost your antioxidants. Antioxidants mop up the free radicals that are believed to cause age-advancing cellular damage. In a recent study of fruit flies (commonly used as human stand-ins), a key antioxidant in apples extended the life span of the flies by 10 percent and preserved their ability to function well late in life.

Stay positive. A recent Applied Psychology review of 160 studies examining emotional health and longevity found “clear and compelling” evidence that people who have a feeling of well-being in their life—people who maintain an optimistic perspective, have harmonious relationships, and minimize stress—outlive those who are anxious, pessimistic, depressed, manic, stressed out, or unable to enjoy daily existence.