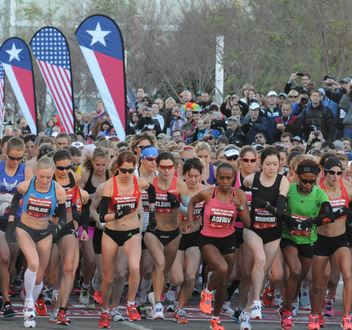 Among a sea of people, she stood, shivering in the early morning dampness. Runners. As far as the eye could see, all lined up, eager, itching. The large mass of people offered a comfortable anonymity, but there was no fooling her; here she was, by herself, about to embark on an adventure of endurance, determination and difficulty, the scale of which she had never faced.


The crowd surrounding her offered some familiar faces. Friendly smiles and gestures of support, cheers. The music pumping in the loud speakers didn’t offer much of an encouragement, and she found herself doubting her capabilities, concerned that she could have done more, be better prepared. But there was no backing out now, the only way was forward. She took a couple steps and closed in on the starting line.

Before the gun went off, she had thoughts for her friends somewhere among the crowd. Less experienced ones, as nervous and jittery as her, maybe even more. Seasoned runners, too. What did they think? Did they, too, feel like she did? Before she took her first step across the line, her last thought went to a friend who’d bailed out. They had planned to run together, at least for a bit. In that moment, she wished he was there, joking around, trying to make her laugh.

Then every single thought she had vanished in the cold morning. As she crossed the line, she emerged from her musings and stepped right into reality. It wasn’t time to dream about running a long distance, it was time to do it. As she took the first deep breath of her journey, the colors became sharper and the sounds, crisper.

Determined to follow her own plan and to refrain from getting carried away by the flow of runners blowing full speed ahead, she put on her headphones and sunk into her music. The morning light was warming the day, and she welcomed the heat on her skin with a smile.

It was going well; her legs were fresh, she was relaxed and she was breathing calmly. She took some moments to look around and appreciate the environment, appreciate that she was out here, doing something amazing and succeeding.

She turned her head. A goofy, grinning runner right behind her had just touched her shoulder. She smiled; she actually had expected this to happen sooner. It was her man, running happy like a kid, without a care in the world. She held out her hand and grabbed his for a minute, deliberately not coming out of her concentration. Step for step, they ran together for a little minute, then he kept going, turning around to make sure she was all right. She gestured for him to shoo away, not to worry.

As the long strip of asphalt was winding underneath her feet, she let herself be carried away by the music, keeping bits of attention to her running and to making sure she drank and ate when needed.


But doubt was never far behind. Slowly at first, but soon unmistakably, some well-known pains started poking her knees. It was going so well! And it’s still early in the race! What if that prevents me from finishing? What if I get hurt? What if…

Around her, the crowd had thinned out and left plenty of space for her to glance around at other runners. What were they thinking? Was it going well for them? Were they struggling? Past them, she noticed the crowd of onlookers for the first time. Passers-by, smiling people with little puffy babies in strollers, impressed tourists cheering her on.

A wave of energy traversed her body as she realized she wasn’t in that crowd. She was down in the street, tackling a physical feat that impressed the Sunday morning masses gathered around the course. An inexplicable feeling of achievement and satisfaction filled her entirely, bringing her to the brink of tears. She was doing this.

The streets rolled under her feet, alternating between smaller and longer steps, applying the best technique they acquired during countless previous outings. She was light, floating and flowing like water. She was running free.

As the increasing roar of the finish line crowd got to her, a struggle between her fatigued body and her determination occurred. As much as she wanted to see that finish line, she felt her muscles beginning to fail her with every step. It felt as if that line kept getting further away, like it was slowly escaping her reach. Her will hadn’t faltered, but she was treading in uncharted territory, far beyond any distance she’d ran before. A deep-rooted fear was slowly gripping her stomach. Her breathing stopped for a moment.

She shook it off. She reached deeper inside and held onto her memories of previous achievements, on her certitudes that, right in this moment, nothing was going to stand between her and that line. From her foundation, she inhaled. The air of that single breath gushed inside like a torrent, washing away the fear, powering over the wave of doubt, igniting a flow of energy yet undiscovered.

Like a wildfire, every fiber of her body lit up. As the last remnants of doubt and apprehension were being consumed forever, she lifted her head and let her eyes follow the row of metal barriers that narrowed the street down to the last passage.

There, it stood; not the finish line of a race, but the opening gate to a brand new confidence.