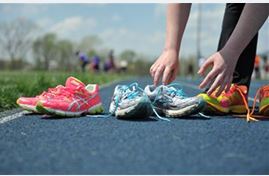 When picking out a new running shoe there are many small details to consider. The process begins with finding the right category of shoe to support your biomechanics and then finding the right size of shoe for the length and width of your foot. Beyond this there are specific factors that differ from one model to another which will affect the feel of the shoe when you are running. The materials used in the sole and in the upper of the shoe, the “drop” of the shoe, and the specific purpose that the shoe was made for will all influence your running experience with a particular model.


The Upper of the Shoe
The “upper” is the top part of the shoe which wraps your foot and holds it to the sole. Most running shoes utilize some variety of breathable mesh for the upper to keep feet cool and allow any moisture to escape. There is some variability in the upper of different shoes, however.

Some shoes come with a weatherproofed version that incorporates waterproof material such as Goretex to keep your feet dry and warm. These materials take away much of the breathability of the shoe, but if you are running in wet or cold environments (such as snow or mud) your feet will remain warm and dry.

Historically the upper of running shoes has been made of multiple pieces of mesh stitched together with overlays of a sturdy material to provide structure. Now many shoes are reducing the stitching as much as possible to diminish rubbing on the feet. It is now common to see seems “welded” together rather than stitched. Instead of sturdy material being used in overlays we are even starting to see the structure of the upper being added with a material that is 3D printed onto the shoe. This is lighter weight than the old materials, and it further reduces instances of rubbing.

The tradeoff with the welding or 3D printing techniques can often be the width of the shoe. Uppers with a more traditional stitched upper tend to have more give and can accommodate a wider foot. A runner with a wide foot who might have been able to get into a regular width shoe in the past (known as “B width” for women and “D width” for men) might have to go up to a wider size. The next width up (called “D width” for women and “2E width” for men) will usually be a shoe built on the same platform as the regular width but with an upper that fits more loosely. The next width up beyond that is usually made with a wider platform to the shoe. Not all shoes are made in all widths, so the selection of shoes may become limited as your look for wider models.

The Sole of the Shoe
There are three distinct parts to the sole of a shoe: the outsole, the midsole, and the insole. The outsole is the part of the shoe that touches the ground. It is usually made of rubber that is a few millimeters thick. The midsole is the majority of what you see when looking at the sole of a shoe. It is usually foam made out of a material called EVA. The insole, sometimes referred to as a sock liner, is the removable insert that sits inside of the shoe. It adds a small amount of cushion and shape to the shoe and allows you to switch it out for an insole of your own.

The midsole is the part of the shoe that varies most from one running shoe model to another. While most companies use EVA as the foam that comprises the base of the midsole, there is usually another cushioning component inlaid in the EVA beneath the heel and forefoot to give the shoe a softer feel. For example, Nike uses air bladders in many of their running and Saucony inserts a grid of soft foam under the foot. Asics and Brooks both place a gel-like pad in the midsole for a soft and durable ride, and Mizuno places a wave-shaped plastic plate under the heel of their shoes because the wave is nature’s way of dissipating energy.


Recently there have been innovations that have changed the common definition of the midsole. Brooks now makes some models with foam that blends the EVA and their gel, called “DNA,” together into one substance for a smoother ride. Adidas has even come up with a completely new midsole material, made of small capsules of material called TPU, for more energy return and durability.

The midsole makes a dramatic difference in the feel of the shoe, but each person is going to have a different definition of the “best” midsole. The degree of softness, and the weight, will vary by midsole composition, but the ideal depends on your personal preference and the intended use of the shoe. Running a faster time in a race might require a lighter shoe and one that has a firmer sole for high energy return so that is does not absorb too much energy, for example. Longer distances might require more cushion to take away some of the beating for the legs, even if it means carrying a little more weight in the shoe.

Heel Drop
A factor that has gained a lot of attention recently is the heel drop of a shoe. This is the difference in height from where your heel sits in the shoe to where your toes sit. For quite a while this drop has been about twelve millimeters, under the rationale that more cushioning under your heel removes some of the impact that your legs and knees would normally experience while running and would also relieve some stress from your Achilles tendon on the back of your leg. It is now the belief that extra cushioning under the heel actually encourages runners to land on their heel, putting more force through their legs.

One of the recent trends has been to reduce the heel drop to encourage a more natural stride that involves landing on the middle or front of the foot with each stride, rather than landing hard on the heel of the shoe. Some runners even recommend running completely barefoot for the most natural stride, although a completely barefoot running style is difficult for the average person who runs on hard, completely flat surfaces that the foot was not designed for.

Minimalist Shoes
Many of the major shoe companies have begun to alter the heel drop of some or all of their shoes to encourage a more efficient stride. Some have lowered the drop in most models to ten millimeters, some to eight millimeters. There is a growing selection of shoes, however, that mimic the barefoot style of running while maintaining some elements of cushioning and support. These are known as minimalist shoes.

Minimalist shoes have a drop of zero to four millimeters and are made to be lighter and more flexible than a standard running shoe. There are varying degrees of minimalist shoes. Some are totally flat with very little cushioning. Others, sometimes referred to as “transitional” minimalist shoes, have a little more cushioning and a slightly higher (four millimeter) drop. They are called “transitional” because they make the transition to minimalist running a little easier for the runner who is accustomed to a more standard running shoe.

It is important to note that switching from a standard running shoe with a higher drop to a minimalist shoe takes some time. The transition should be done slowly, starting by working the minimalist shoe into about ten percent of your weekly mileage for the first couple of weeks and then increasing the usage from there if desired. The lower drop of the shoe will put more stress on the calf muscles and Achilles tendon on the back of the legs, so it is important to strengthen these before going all in.

An interesting fact to consider is that all of the sizes of a given model of running shoe have the same heel drop, whether it is a women’s size 6 or a men’s size 14. Therefore, if you wear a smaller shoe you will probably notice a change in heel drop more than somebody who wears a larger shoe because the change in the “slope” of your foot will be greater.

While it is not uncommon to use transitional or minimalist shoes as a full-time, everyday shoe, many shoe companies recommend them as a tool to add to your training arsenal instead. Working minimalist shoes into your weekly routine for one or two runs, in addition to your standard shoes, utilizes and strengthens a variety of muscles instead of working the same muscles with the same pair of shoes every day. This makes for a more well-rounded runner and reduces the chances for overuse injuries over time.

One should expect to get fewer miles out of a minimalist shoe than a standard running shoe, since there is less substance to the sole of the shoe. Instead of the regular 300-500 mile life expectancy of a shoe, 250-300 miles is probably more realistic for minimalist shoes.


Trail Shoes
If you are planning most of your miles to be on rugged trails, with rocks and roots and muddy or slippery terrain, then you might want to look for a trail-specific running shoe. Trail shoes are similar to road shoes but with a few meaningful tweaks.

The outsole of a shoe is going to be the most obvious difference in a trail shoe. The lugs are much deeper than the mostly-flat outsole of a road shoe, and there will be reverse tread on the heel to aid in traction when running down hills.

The midsole of a trail running shoe often incorporates a dense material known as a “rock plate” to protect your feet from bruising by stepping on rocks and tree roots. The rock plate increases the stiffness of a shoe, but the added protection is necessary on rough trails. Trail shoes also have a more robust toe guard to protect your toes when you kick a rock or other debris.

The upper varies from one trail shoe to another. Some have breathable mesh, some have the weather-resistant, waterproof material. Typical running conditions will determine which is necessary for your running. If your trails are wet and muddy a weatherproof shoe might work great. If you frequently run across streams and other water that is more than ankle deep you will actually want a more breathable shoe that will let the water escape. A waterproof shoe will actually hold much of the water in.

If you only run off-road occasionally, or are running on mild, packed-down trails, a standard road shoe will actually work just as well as a trail shoe in most instances.