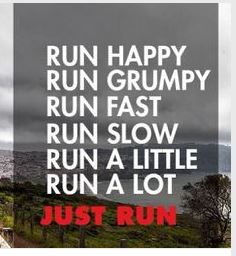 Question: Need some inspiration, caffeine or something. I get home from work (desk job) and I am just done… I can’t seem to find the motivation to get up and get moving but I am amazing at coming up with excuses or rather rationalizations for sitting on my butt. I have a muddy mutt run 5K in less than a month with my new dog and we really need to work on his lead manners and mesh as a team but I am so unmotivated… ugh…. I eat pretty clean maybe too clean – maybe coffee in the afternoon???? thoughts


Answers from Runners:
Change into your running clothes at the office and just grab your dog when you get home. Don’t sit down, don’t rest, just go.

I’m same way but I just get my running clothes on and do it. Some days my legs are tired& I’m dragging but feel better & proud that I got out there & got it done.

When I have to do runs in the afternoon, I will not sit down when I get home. Sometimes I just take a change of clothes with me to avoid going home at all.

I’ve tried running in the morning and that just didn’t work with my schedule. I actually have two dogs but one just can’t run anymore – he’s 13 and actually pouts – I feel bad leaving him behind but he just can’t make it even a 1/4 mile before he’s done and panting. My younger dog is 7 and very fast but not as good on lead. I know he can make all the obstacles on the mutt run (but can I???) Good idea on changing before I go home and just leave – not allow my mind to stop me. I only drink one cup of coffee in the morning – I am thinking some afternoon Joe might help keep me going.

I feel you on this. I go through cycles where I can run in the morning – but right now, my son is waking up early & at unpredictable early times – he wants MOMMY in the morning, so no run for me then. I drink coffee, lots of coffee all the time. I try to eat every few hours, but it’s tricky to find what to eat in the afternoon that’ll keep me going, but won’t give me GI issues at night. I can’t run until around 8:30 – I don’t eat dinner until afterward (we don’t have dinner as a family due to schedules & food issues, so not a sacrifice there).

I have an office job as well…so when i get home..I don’t want to go ANYWHERE..i just want my pj’s and to just unwind…it makes it much harder to get back out there for my runs if i totally “unwind”…same thing goes for the gym….so I think the key to getting it done is to eliminate as many excuses as you can …. like the others suggested…I dress with my undergarments like sports bra or fitted cami and bring the shoes and pants to work so i can just pop those on quickly and head out either to the gym or straight for a run…I typically run evenings so I also don’t totally unwind …it’s all mental for me..if i let myself *sigh* or do that exhale like ahhh zzzzz that’s it for me lol….so just eliminate as many excuses as you can and try the java and see if that gives u the boost u feel u need. Keep remembering your goal.

I once drank an energy thing – Pop Fizz in the afternoon – OMG DID I HAVE ENERGY! SO MUCH ENERGY! And then I read the ingredients & OMG the amount of caffeine & guarine & all that stuff that I’m now afraid to drink it for fear of having a heart attack or something.

Kind of funny on the trail last night when someone stopped to pet Buddy and said Hey Buddy and he got really excited they knew his name – not really but I told them that was his name – good laugh along the way .. btw it took me an hour to get out the door but at least I went

I agree with with changing at work and just going! Or, have your clothes all laid out and ready to go as SOON as you get home. Don’t look at your computer, etc. Just change and go. As for running with your dog, a harness and short leash help. 🙂

ha ha nap has always been an alternative but then I really wouldn’t get out and moving – does dreaming about running count??? lol

15 MINUTE SNOOZE!! And I mean, 15 minutes. I do that when I get home from work (or in the car if my hubby drives home), and I’m telling you, it works wonders! No matter how groggy you feel when that alarm goes off after 15 minutes, get up and move…

does your dog lead you or you lead, I have a English Springer Spaniel which loves to run but she drags me at the beginning after a mile we do sync but she just wants to go, any suggestions, oh and I like the jo in the afternoon, just one!

I lead – he’s still training on the trail so I keep him at a “right here” on my left and when he pulls I sit him down. It takes longer to get a good run in but he gets the idea – my trainer uses this same technique. I have found that if I take him outside and play fetch with him for a little while before we go it runs off some of that steam. Usually on the way back he is at a calmer pace. Believe me I think he would rather have a faster running partner than me – I think he is actually a Kenyan… lol

I also find keeping the training treats pouch on my left side helpful – he will stay closer to me then.