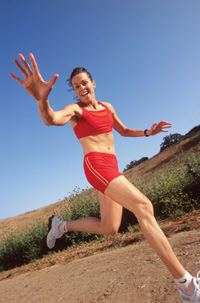 Being a woman runner can sometimes be like trying to live two lives simultaneously. Here’s how to take control of your body – and your life

If you’re like most women runners, you face a daily survival test that includes juggling a complex mix of domestic, business and social responsibilities. You yearn for the time to slip out of the door, lengthen your stride, feel the wind in your hair and run. Not a complicated life requirement, to be sure, but one that’s often tough to initiate – until now.

We’ve tackled the busy woman’s toughest barriers to regular running, providing tips from noted experts and everyday runners on how to overcome each one. Can’t find the time to run? Need more supportive friends? Relax. Read on. And get ready to handle these top seven challenges without breaking your stride.


Survive This: Those Long Nine Months

You’re pleased as punch that you’re pregnant, but worried that you might harm the baby if you continue running. Well, worry no more. It used to be that obstetricians would advise pregnant women to monitor their heart rate while exercising to make sure that it didn’t exceed 140bpm – a ridiculously low rate for anyone who runs consistently. The thinking was that if a pregnant woman pushed herself too hard, bloodflow to the placenta might be compromised. Thanks in large part to more recent research carried out at Case Western Medical Center in the USA, we now know that there’s little or no evidence to support this theory in fit women. In fact, well-monitored exercise is recommended for fit women during pregnancy – and that includes running. You can exercise hard (but not to exhaustion) so long as you’re already in reasonably good shape and take the following precautions.

Feel for the kicks In mid to late pregnancy, you should feel your baby move two to three times in the first 30 minutes after a run. If your baby seems uncharacteristically sluggish, consult your obstetrician. Listen to your body If running becomes uncomfortable as your pregnancy progresses, switch to fast walking. Or consider swapping the treadmill for a new contraption, such as an exercise bike. Remember that you’re pregnant Don’t ignore symptoms which may indicate a serious problem. For instance, persistent, localised pain or vaginal bleeding during or after a run is not normal. Consult your doctor immediately if you experience either.

Tip from the trenches: “Pregnancy is not a time to break records, of course, or even to boost your training,” says Julie Colliton, a GP and runner, who’s currently pregnant with her first child and runs about 28 miles a week. “It’s a time to listen to your body. And my body tells me that running in the fresh air helps my nausea, and regular exercise helps my self-esteem.”

Survive This: The Time Crunch

According to a recent study by the American College of Sports Medicine, mothers who work outside the home have the toughest time fitting in exercise. Here are three ways to satisfy your boss and your running needs without sacrificing the needs of your family.

Solicit help Explain your running commitment to your boss, your work colleagues and your spouse, and ask for support. Be calm, be specific – and be prepared to explain it all again.


Slip in a quickie Numerous studies show that your heart and lungs can’t tell the difference between several short bouts of exercise and one longer session. So if you can’t find 30 minutes to devote to a run, head out for a quick 10-15 minutes in the morning, then slip in another 10-minute trot later on that evening.

Tip from the trenches: “I recently bought my seven-year-old daughter a bike, and she now rides it at the weekend while I run around our local park,” says London-based runner Victoria Sadler. “She usually chatters away while riding beside me. It’s quality time together, I’m running, and neither has to be sacrificed for the other.”

Exercise may ameliorate menstrual cramps, but yours may be so persistent that they actually prevent you from exercising. That’s why we asked sports gynaecologist Mona Shangold, author of The Complete Sports Medicine Book for Women, to help us understand the problem and to find a cure.

First, the lesson: the inner lining of the uterus produces hormone-like substances called prostaglandins, which cause the uterine muscle to contract. When that muscle contracts, it doesn’t get enough oxygen, so you feel cramping and pain.


Pop a painkiller To stop the pain, Dr Shangold says that you must prevent your body from making prostaglandins by taking prostaglandin-inhibiting medications, such as ibuprofen and naproxen sodium. “Take the recommended dosage with food the moment you feel any pain or as soon as your period begins, whichever comes first,” she says. “And don’t stop until your period ends.”

Note that people who are allergic to aspirin or aspirin-type products should steer clear of ibuprofen and naproxen sodium. Stick with acetaminophen (paracetamol) instead. While it does not inhibit those nasty prostaglandins, it will reduce some of the discomfort.

Tip from the trenches: “When I eat more fruit, vegetables and grains and cut back on sugar, fat, salt and caffeine, I’m not as moody. And I also experience less bloating and cramping with my periods,” says long-term runner Pam Jones from Bristol. While research is slow to explain why such a diet reduces menstrual symptoms, plenty of other women also swear by it.

Survive This: A Stuck Scale So you want to lose a few pounds – for your performance as well as your appearance. Who doesn’t? Long-term runner and sports-science researcher Steven Blair offers the following surefire advice for moving the needle.

Forget about increasing your intensity Focus instead on gradually lengthening the time or distance that you run. You burn almost the same number of calories per mile no matter how slow you go. (Okay, you burn slightly more by running faster – but not much more.) So if you run at a relaxed pace that allows you to run more miles, you’ll burn more calories. In other words, run further, not faster.

Tip from the trenches: “I’ve found that when I exercise first thing in the morning, I’m more likely to get a longer training run in, and I feel great about myself,” says Debbie Paullin from Preston. “As a result, I choose better foods during the day.”

Survive This: The Rub

Choose the right style If you wear an A or B cup, choose compression-style athletic bras (the kind that keep your breasts close to your chest). If you wear a C or a D cup, choose harness-type bras with defined cups.

Be a material girl Look for bras made from synthetic fibres like CoolMax or Dri-FIT, which are high-tech materials that wick moisture away from your breasts and reduce friction or chafing.

Try before you buy No matter what style of sports bra you choose, make sure it’s comfortable the first time you wear it – which should be in the dressing room. Never buy by size; buy by fit.

Tip from the trenches: “Wear your bra inside out,” suggests Newcastle runner Amy Berg. “You’ll get the same support without the chafing from the seams.”

Your knees may not be creaky. They may not even ache. But you may need to baby them nonetheless. You should pamper your knees for the simple reason that you’re a woman. The fact is, there may be a link between knee injuries in women (the most common injury suffered by female readers of RW is to the knee) and the presence of oestrogen, that female hormone which we love to hate. Here are some ways to keep your knees strong.

Run on soft surfaces Stay off pavements. Since concrete has no give, it forces your feet, ankles and knees to absorb the full force of impact. Wherever possible, run off-road on grass or trails.

Be strong A recent study showed that a combination of strength training and jumping exercises can build up your leg muscles enough to support your knees and prevent knee injuries.

Get flexible According to another recent study, women may suffer more knee injuries than men because women tend to run in a more upright position, which places more pressure on their knees. Before you start altering your stride, however, simply remember to stretch regularly, so that your quadriceps, hamstrings and calves (the major muscle groups that surround and support your knees) are as flexible as can be.

Tip from the trenches: “Over the years, I’ve learned to listen to my knees – and particularly to my iliotibial bands [the tissue that connects the knee to the hip] when they scream,” says 44-year-old Mandy Amster. “I used to get depressed about decreasing my miles when these bands felt tight. But now I just cut back and work on my stretching and my speed. After I’ve recovered, I’m able to do my long runs even faster than before.”

Can’t quite convince your more sedentary friends of your sanity? Andy Palmer, sports psychologist and marathon runner, has some surprising advice: “Accept it – runners are crazy. The trouble is, we’re crazy in a way that isn’t familiar to most people, and that can be threatening to them.” Here’s Palmer’s advice.


Stop trying to turn your friends into runners But don’t try to hide your commitment to running, either. Instead, share by example.

“In Eastern societies, they teach you to let go of the emotional content of a problem, because your needs often get in the way,” says Palmer. “Say you’re consumed with doing well in a race. You try too hard, you tighten up – and you fail. If you’d been able to pull back a bit and relax – let go of your need to do well – you probably would have performed better.” And the same applies, he says, to gaining support from your friends. If you’re secure about why you run and you don’t desperately need anyone else’s approval, you’ll be much more likely to get it.

Tip from the trenches: “The best approach I’ve ever heard for enticing your inactive friends to start training came from an ultrarunner,” says Manchester runner Marcia Noyes. “He had a friend who refused to exercise, no matter what – until he tried a different approach. He said, ‘I’m going for a bike ride. It really doesn’t matter whether I go fast or slow, and I’d love some company. Would you join me?’ He didn’t insist – he just invited.