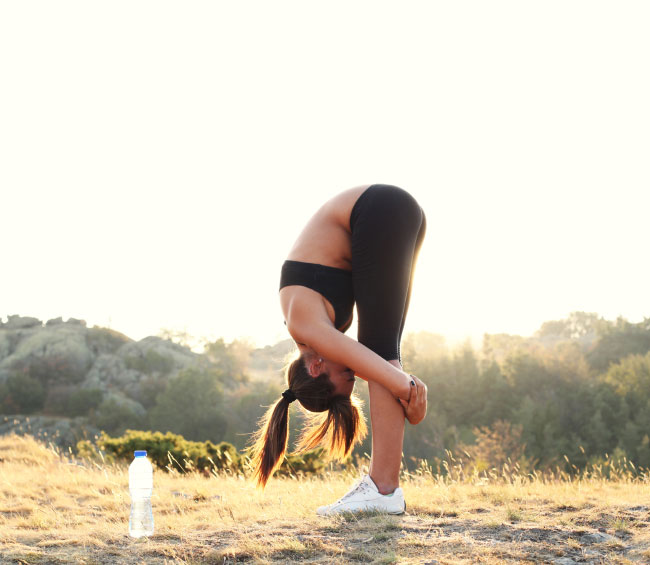 From improving your bone density to keeping you happy, see how running does much more than just help you lose weight.

Though running is a very popular activity, it still gets a bad rap from some who believe it’s too hard on the body and makes you prone to injury. As someone who just qualified for the Boston Marathon (if I do say so myself), I can tell you that despite the misconceptions about running, there are major health benefits to doing it regularly (outside of just losing weight). Let’s look at the most basic:

How many people have you heard say running is bad for your joints? The science doesn’t back up that claim, and this makes me happy.

“There is a clear body of evidence that running does not lead to the development of osteoarthritis,” Dr. Reed Ferber, director of the University of Calgary’s Running Injury Clinic recently told me. “Some of those studies have good evidence that it is actually protective of joints.”

Ferber asserts that being sedentary is what’s harmful: “Immobilization has corrosive effects for your cartilage. Moving is what lubricates your joints,” he says.

But what about people who get injured and have to give it up? Ferber says these are not joint issues, but soft tissue problems that arise from poor technique and over-training. These are problems that can be fixed with expert help.

Running is the most popular, easy and effective way to do aerobic training. It’s something that allows you to start slow and, when you’re ready, gradually push towards higher and higher intensities and longer distances.

Last year a study in the Journal of Applied Physiology found that aerobic training, “is the optimal mode of exercise for reducing fat mass.” And though a lot of people would argue that weightlifting is the ultimate method for fat loss, that’s simply not the case.

Of course you can’t eat a terrible diet and expect to lose weight no matter how much you exercise. I’m a big advocate of exercise being used as a powerful tool to improve eating behaviour, and a recent study published in Metabolism found that aerobic exercise is actually more effective at controlling appetite than weightlifting.

While running may trump lifting for fat loss, there’s no doubt that weightlifting is great for preserving (and building) muscle as well as increasing bone density. This doesn’t mean running doesn’t do the same.

I’m a big fan of lifting for women, but know that running (and other weight-bearing exercises) can also preserve muscle mass and improve bone density.

4. It’s good for your heart

A study of female runners in the New England Journal of Medicine found that being a regular runner created, “Substantial increase in HDL [good] cholesterol.” The study also stressed the importance of aerobic exercise in lowering LDL (bad) cholesterol.

Being sensitive to insulin is positive because insulin resistance can lead to developing type 2 diabetes. So it’s a good thing that running improves this. A 2012 study from the University of Pittsburgh found, “Exercise intensity was also significantly related to improvements in insulin sensitivity, whereas frequency was not,” meaning the study’s participants saw an increase in insulin sensitivity based on how hard they pushed their aerobic fitness — and running is pretty much the hardest you can go.

In another age-related finding, a study in the Archives of Internal Medicine, that asked a nation-wide club of runners (aged 50-plus) to asses their health found that, “running is associated with reduced disability in later life and a notable survival advantage.” It also found a decreased chance of smoking in adult runners.

On a more simple note, running’s a great way to reduce stress — and who doesn’t need that?

Running provides the average person more opportunity for competition than a lot of other sports. You can do fundraising runs, tough mudders or even do a full marathon. There are running groups you can join or you can go with a friend (which is a great way to catch up without consuming calories or spending money). You can push your kids in a stroller, chase them while they’re on their bikes or perhaps they can run with you. However you choose to run, having an active social life is great for your health and your soul.

If I’ve convinced you to give running a try, realize that slow and steady is the way to go to prevent both injury and burnout. Be sure to read this piece for tips on how to become a runner.

James S. Fell, MBA, is a certified strength and conditioning specialist with the National Strength and Conditioning Association. His syndicated column “In-Your-Face Fitness” for the Chicago Tribune runs in dozens of major newspapers across the U.S., and he also interviews well-known celebrities about their fitness regimens for the Los Angeles Times. In addition to being a Chatelaine fitness columnist, Fell is the senior fitness columnist for AskMen.com. Based in Calgary, he is an avid runner, cyclist and weightlifter, and wishes he had more opportunities to go downhill skiing with his wife and two children. You can look for his first book out in early 2014. Visit his site for a free metabolism report.