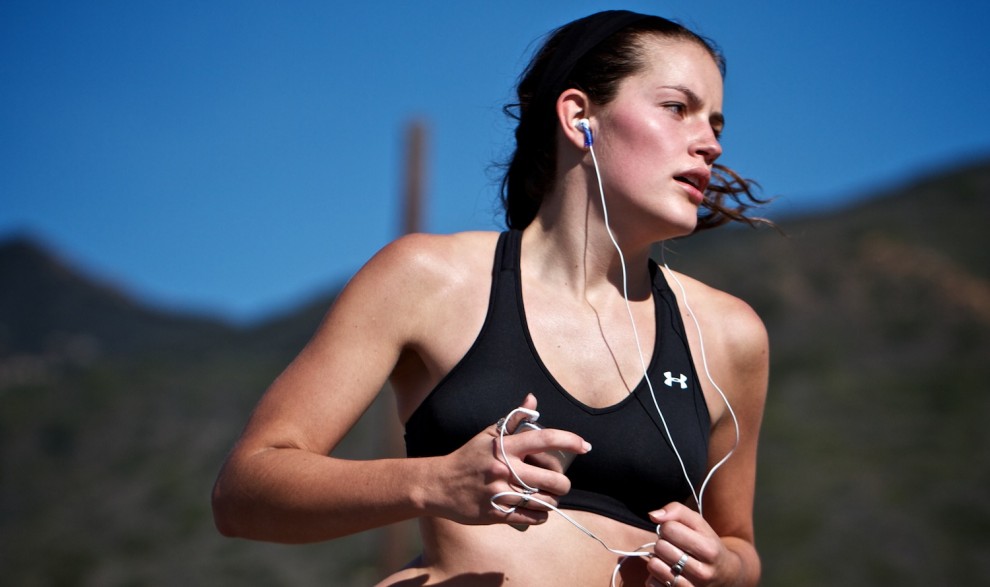 Several years ago, cognitive scientist Tom Fritz spent some time in northern Cameroon, a mountainous and culturally isolated region in the middle of Africa. He was observing the people who live there, the Mafa, who (from our western perspective, anyway) have some fascinating musical rituals.

The Mafa language doesn’t have a word for music because music is always intertwined with specific rituals, such as preparing for the harvest. Men will stand in a circle and play repetitive melodies on wooden flutes. Playing a Mafan flute requires a lot of energy and rapid exhalation. Some of the men will dance and run while playing, and the rituals often last several hours. “It’s physically very exhausting — they achieve this musical ecstasy,” Fritz says. “It got me interested in how one could translate something like that to our western culture.”

Fritz’s version of that musical ecstasy debuted in a study in the Proceedings of the National Academy of Sciences. He rigged up several pieces of gym equipment to a computer so that using the machines produces electronic music. It’s hard to explain in words, so here’s a video of Fritz showing off his system:

Fritz calls the system jymmin — “a mixture of jammin’, like Bob Marley, and gym,” he says. In the new study, Fritz uses the system to investigate a phenomenon most of us are familiar with: the way that music eases the pain of working out.

There are many historical examples of people making and listening to music while doing hard labor. For example, chain gangs of prisoners — like these men working in a Texas prison in 1966 — would often sing in synchrony with the beat of their work.

But scientists didn’t really begin studying this connection between music and exercise until the mid-1990s, when technology suddenly made it possible for a lot of people to take music wherever they went. “When I used to go running in the ’80s and listen to music, I had to carry a walkman. And at the time we thought, ‘Oh these are great!’” recalls Andy Lane, an exercise scientist at the University of Wolverhampton in the UK. “They were terrible, of course, these great heavy things and the headphones never worked. Now you’ve got iPods, and this massive use of this technology. So the research corresponds with the demand.”

Research by Lane and others has shown, for example, that music can reduce your perception of exhaustion during a moderate workout and boost your physical output. What’s more, syncing your movements with a musical beat seems to increase stamina and metabolic efficiency.

The mainstream explanation for these positive effects is that music serves as a mental distraction. But Fritz’s new study suggests that’s not the whole story.

Fritz asked 61 non-athlete volunteers to workout on one of three machines — a tower, a stepper, or a stomach trainer — for six minutes and then fill out questionnaires about their perceived exertion. The volunteers always worked out in groups of three. In one session, they listened to music passively, and in another they made music together using Fritz’s jymmin set-up.

For 53 of the 61 participants, their perceived exertion was lower during the jymmin session than the passive-listening session, the study found. That’s interesting, Fritz says, because when jymmin you can’t be distracted from your ‘proprioception’ — the awareness of your body’s position in space and the force it’s exerting. On the contrary, you must focus on your muscles. “You’re playing a melody and then remembering, OK, if I’m at this position, then I can make this tone,” he says. “Your proprioception is your guide to playing the music.”

Other experts are impressed by the technological innovation behind the jymmin set-up, but have some questions about the study’s design. One concern is that Fritz reported perceived exertion not as raw scores, but as ratios of how a participant felt about jymmin versus passive listening. The raw scores are important because previous research has shown that during very intense workouts, the distraction effect disappears: The strain on your body is so great that your brain ignores the music. “These ratios are just frustrating,” Lane says. “They take away the ability to interpret the results.”

And if the data are true, it’s unclear why the jymmin set-up would lead to lower scores of perceived exertion. Fritz says there are many possibilities. It could be what he terms “musical agency,” or the sense that you’re composing or tweaking the music. That might explain why runners tend to match their steps to musical beats, he says. ”It might be that they have some type of illusion of musical agency.”

Others are drawn to a social explanation instead. “There seems to be something going on here with play and fun and the interaction between people,” says Beau Sievers, a graduate student at Dartmouth whose research has uncovered a universal link between music and motion. ”I would have liked to see some analysis of the interactions between the participants, to see if people are working together to create some kind of musical result with one another.”

Fritz agrees that the social aspect of jymmin is important, and he plans on studying it in more depth. Based on his own experience, he says, the social influences is particularly strong after using the machines for 10 minutes or more, when you really start to feel the burn.

“You reach a point where you think, wow, I’m ready to sit down and go home. But you’re in the middle of a session, and you realize someone else is just starting some kind of improvisation, and so you think, OK, OK, I can’t stop now,” he says. “All of a sudden, your idea that you’ve reached your limit is totally gone. And you can play on and on and on.”

You can watch a longer video of Fritz jymmin here.

by Virginia Hughes from www.nationalgeographic.com