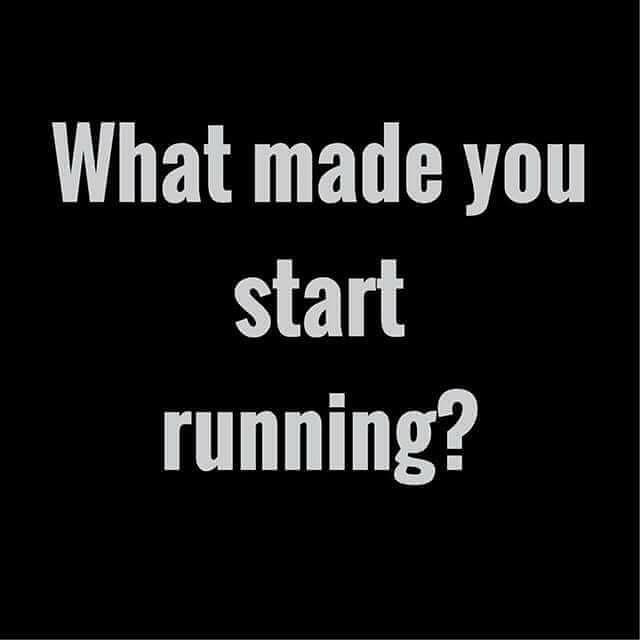 What made you start running?

After my senior season of field hockey….something was amiss…then I realized it was the endorphins of running…30 years later still doing it

🙂  — Allison
Watching The Hunger Games. I wish I was kidding.

😂 But for some reason it was Katniss running so much that planted the seed of “I want to run.” — Tara
To get in better shape for my first snowboarding lesson and keep up with teenage boys. Only made it down the bunny hill twice before I fell and fractured my elbow. Less then 2 weeks later I ran my second 5K with the fractured elbow, just kept my arm at 90 degrees

🙂 Now a year and a half, and 2 half’s latter, I have started training for my first marathon. — Mellisa
My son he was in community college and he said “Hey mom we should do this 5k they are having “ and we did and we both are hooked on running races that was 4 years ago. — Earl
My dad when I was 3 always went for a run when he came home from work by the time he came home I had to be in bed. So I asked if I could run with him and he said yes. That was 38 years ago and we still run together. — Kelly
Well Hate the Gym. I Run the streets “No Rules No Dues”. Run my Day Off/Takes Stress Off. It jus feels good when your done.

💦  – Erin
I met a cute boy who I knew was a runner. I started running to have something in common. I have called that cute boy my husband for almost 15 years now and have been a runner for 17. — Kathy
I am a big Disney fan and grew up close to Disneyland. Eventually I found out they do races and decided I needed to cross it off my bucket list. In the process of training, I fell in love with running. — Emlyn
I was fat and I wanted to lose weight by the time I worked up to walking 5miles, I decided running would be faster and I could get my workout over with quicker! — Andrea
A very sweet friend asked me to run a 5k with her, I skipped running in gym class growing up, so I was reluctant but trained and didn’t die….lol and it’s been 2 years and I ran my first half marathon in November! — Carol
Leslie Sansone videos with HIIT.  I was walking one day and thought, hum… I can run as long as she is jumping in those videos. When I was confident with that, then I started the C25K app, and then then 10k app. Now I just run for the cardio benefits and beating my own time or distance. — Jennifer
A trainer told me when I got to goal I could do races to maintain. I told him I can’t run. He set out to prove me wrong and I found I love running. It is my go to stress relief instead of sugar. — Laura
A colicky baby whose wind up swing only lasted 30min. I would jump on the treadmill and run as fast and as long as the swing went. Wouldn’t trade him or running now for the world! — Eileen
National run group called Black Girls Run! The mission to improve the health of my community. The all volunteer group has a 6-8 week walk before you run program. I met up with the group weekly and the rest is history. I feel
So much better running! I am 60! I am over weight. I started to run three years ago! — Kim
My health! I was 67 lbs over weight! Running was one of the hardest things I ever did! Turns out I LOVE It! Lost the 67 lbs but gained my life back!

❤ — Nicole
A bad knee injury then surgery, 9 mo to walk normal again in PT. Couldn’t run to get out of the way of a car that almost hit me. Freaked me out. Decided to build up stamina walking while I quit vaping – trade bad habits out. Then one day I felt like a kid again, wanting to run instead of walking super fast. & from there, just kept finding new challenges to keep pushing myself. Now I can’t imagine my life without the feeling of weightlessness while sprinting. The high! The depression & anxiety relief! How much better my clothes fit! My confidence for having pushed myself & not giving up! I even quit wearing make up just to be one step closer to MY RUN.

I was diagnosed with Rheumatoid Arthritis and after a few years of doing nothing I started walking every day. One day I decided to run across each driveway. I run 4-5 days a week/3-5 Mike’s now and I’m down to one medication from 12. It has changed my life. It helps with depression/ anxiety. — Rebecca

The freshman 15. It was almost 20 years ago!! I’ve been running ever since. In different capacities, depending on my physical state at the time. I run now for peace and calmness, over trying to make my body look a certain way. It’s way more rewarding. — Kathleen