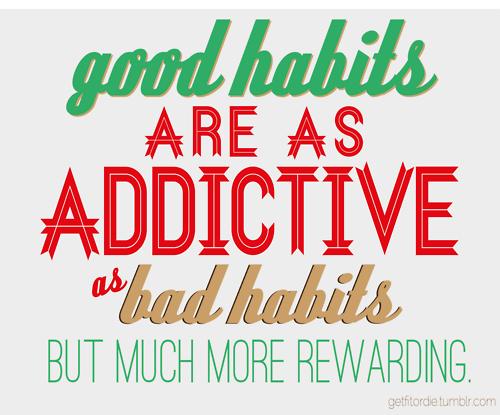 With a small amount of initial discipline, you can create a new habit that requires little effort to maintain. Here are some tips for creating new habits and making them stick: 1. Commit to Thirty Days – Three to four weeks is all the time you need to make a habit automatic. If you can make it through the initial conditioning phase, it becomes much easier to sustain. A month is a good block of time to commit to a change since it easily fits in your calendar.

2. Make it Daily – Consistency is critical if you want to make a habit stick. If you want to start exercising, go to the gym every day for your first thirty days. Going a couple times a week will make it harder to form the habit. Activities you do once every few days are trickier to lock in as habits.


3. Start Simple – Don’t try to completely change your life in one day. It is easy to get over-motivated and take on too much. If you wanted to study two hours a day, first make the habit to go for thirty minutes and build on that.

4. Remind Yourself – Around two weeks into your commitment it can be easy to forget. Place reminders to execute your habit each day or you might miss a few days. If you miss time it defeats the purpose of setting a habit to begin with.

5. Stay Consistent – The more consistent your habit the easier it will be to stick. If you want to start exercising, try going at the same time, to the same place for your thirty days. When cues like time of day, place and circumstances are the same in each case it is easier to stick.

6. Get a Buddy – Find someone who will go along with you and keep you motivated if you feel like quitting.

7. Form a Trigger – A trigger is a ritual you use right before executing your habit. If you wanted to wake up earlier, this could mean waking up in exactly the same way each morning. If you wanted to quit smoking you could practice snapping your fingers each time you felt the urge to pick up a cigarette.

8. Replace Lost Needs – If you are giving up something in your habit, make sure you are adequately replacing any needs you’ve lost. If watching television gave you a way to relax, you could take up meditation or reading as a way to replace that same need.


9. Be Imperfect – Don’t expect all your attempts to change habits to be successful immediately. It took me four independent tries before I started exercising regularly. Now I love it. Try your best, but expect a few bumps along the way.

10. Use “But” – A prominent habit changing therapist once told me this great technique for changing bad thought patterns. When you start to think negative thoughts, use the word “but” to interrupt it. “I’m no good at this, but, if I work at it I might get better later.”

11. Remove Temptation – Restructure your environment so it won’t tempt you in the first thirty days. Remove junk food from your house, cancel your cable subscription, throw out the cigarettes so you won’t need to struggle with willpower later.

12. Associate With Role Models – Spend more time with people who model the habits you want to mirror. A recent study found that having an obese friend indicated you were more likely to become fat. You become what you spend time around.

13. Run it as an Experiment – Withhold judgment until after a month has past and use it as an experiment in behavior. Experiments can’t fail, they just have different results so it will give you a different perspective on changing your habit.

15. Write it Down – A piece of paper with a resolution on it isn’t that important. Writing that resolution is. Writing makes your ideas more clear and focuses you on your end result.

16. Know the Benefits – Familiarize yourself with the benefits of making a change. Get books that show the benefits of regular exercise. Notice any changes in energy levels after you take on a new diet.

17. Know the Pain – You should also be aware of the consequences. Exposing yourself to realistic information about the downsides of not making a change will give you added motivation.

18. Do it For Yourself – Don’t worry about all the things you “should” have as habits. Instead tool your habits towards your goals and the things that motivate you. Weak guilt and empty resolutions aren’t enough.