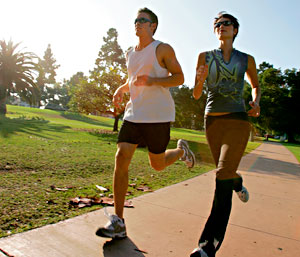 Given the choice between moving a lot more or eating a lot less, it’s more fun to do the former. When running is going well, it does feel great. The miles fly by and the calories are torched, roughly 100 for every mile you run.

Dieting? Well, it’s a drag. It’s all about deprivation and what you can’t have. Cut this, eliminate that. It’s about subtraction, saying no.

With running you’re adding a new sport, new friends, and new experiences to your life. You’re engaging in something human beings have done since the dawn of time. According to evolutionary biologists, the first humans were long-distance athletes, running across the grasslands, stalking dinner. Dinner being some form of lean meat. And there was no pulling in at the Dairy Queen for dessert afterward.

Dieting, at least among the masses, is a relatively recent phenomenon. Some 47 percent of Americans are trying to lose weight at any given time, according to the Centers for Disease Control and Prevention. But when two out of every three adults in America is overweight, that’s somewhat understandable.


So think of how you would rather lose weight and what you would like to tell people. What would you rather tell yourself? That you’re learning a new sport? Or that you’re on a diet.

This plan uses a gentle buildup. It starts with walking only, building up to 30 minutes at a time. The plan then includes some running. One minute at first. When you’re ready, 2 minutes. Then 3, 5, 7, minutes. At a rate you determine those 30 minutes of walking morph into 30 minutes of nonstop running. In other words, take as long as you need to become a runner. We’ve found that although it may take some time, once you’re a runner, you will want to stay a runner.

STAGE 1: Get moving!
This program starts with walking. Before you can try running, you need to be able to complete four walks, each one 30 minutes nonstop, in a week. You might be able to do that this week without a problem. In that case, once you’ve done four walking workouts, you’re ready to proceed to the next stage.

Or you might need to start at less than 30 minutes, depending on what kind of shape you’re in and how much extra weight you’re carrying around.

What kind of pace should you walk at? Pick something that’s comfortable—steady, not aggressive. Aim for a pace that’s a little faster than your stroll-down-the-driveway-in-you-slippers-to-get-the-newspaper walk but slower than your might-miss-my-connecting-flight walk. Don’t sweat the pace, just get out and do it.

You do not want to be huffing and puffing. If you’re panting, you’re going too fast. Remember, this is punitive. You’re not supposed to finish each workout feeling like you need a nap. Your breathing is an instantaneous check of your effort level. Take the “talk test.” If you can get a few sentences out, you’re fine. If you need to pause for a breath between words, take your foot off the gas until you can talk comfortably.

STAGE 2: It starts with a single step
The pages of Runner’s World are filled with famous writers singing the praises of running. We think it’s pretty cool too. When running feels good, it feels great. Of course, when you’re just starting, it feels hard. Damn hard. Exhausting even. It’s work. A runner’s high? You’ve got to be kidding me.


For now it’s going to feel like a major effort. But even while you’re exerting yourself, know what you’re doing: Your heart is getting stronger, your lungs are breathing deeper. You may see your blood pressure, cholesterol, and triglycerides drop. You’re building muscles everywhere, especially in your legs, but also in your core due to all your deep breathing. You’re increasing bone density. Then there are the “soft” benefits: the calm, the sense of achievement, the sounder sleep at night.

As you’re starting out, you need to run slowly. Very slowly. How slow is slow? Try this: Make your run no faster than your walk. Yes, that’s right: No faster than your walk. At this point, you have to set side any preconceived notions you have about running. If the Presidential Physical Fitness testing of your youth still haunts you, fear not. No one is standing by you with a stopwatch. This run does not have to be fast, nor should if be. In these 1-minute running segments, you’re not required to cover a set distance.

STAGE 3: Timing is everything
As you’ve seen by now, this running plan is all about gradual. It takes you from walking for 30 minutes to running for 30 minutes in 12 stages. (You’ll find 6 of these stages here.

But just because there are 12 stages doesn’t mean you have to do it in 12 weeks. You set the pace. You increase when you’re ready. You can stretch this program out over the course of 6 months if that suits you better.

It’s common with new runners and exercisers that something happens to subvert their week, and they fall off the wagon. The mistake is the try to climb back on the wagon at the exact same place where you fell off or, worse, to try to increase the intensity without having done your homework. Make sure you’ve laid the groundwork before you try to build up the interval. When you’re ready, take it up a notch.

The same rules apply from the previous stage:

Extra Credit
If you’re used to doing another activity, keep it up! The more active you are, the more calories you burn. Don’t think that just because you’re starting to run, you have to quit all your other activities. Runners just call other sports cross-training, and they’re good for you. They work muscle groups that you might not hit with running and give you a mental break in our routine when you have something different to anticipate. Plus, you might notice that walking and running are already helping those endeavors. Maybe you’re not exhausted anymore after a long set of tennis.

STAGE 4: Sticking with it
If you’re doing these workouts correctly, there is not a big shift in speed from the walk to the run. You’re running about the pace of a brisk walk. And you shouldn’t be getting out of breath. If you are, slow it down. Some people start to jog and get all embarrassed by their slow pace. And their jiggling. But really, you shouldn’t be shy. People who you think are passing judgment usually aren’t. If you sense that people are taking a long look at you as you run by, it’s probably because they admire your effort. You’re out there doing something for yourself. They wish they had the courage to run.

A lot of new runners think that running is an exclusive club, and they don’t belong if they can’t achieve a certain speed. That’s nonsense, and it’s self-defeating. Don’t worry about anyone else. Worry about you. You’re the one taking control of your health, which puts you in a select group. With much of American overweight, pretty soon you’ll be the authority, the one people are coming to for tips. Plus, if you can stick it out for 12 weeks or so, you’ll get faster without even realizing it. It’s simply a natural development as you grow more fit.

You’re halfway there! If you can run for 15 minutes at a time, that a big deal. And if you do this workout four times a week, you’ll be running an hour this week. That’s probably didn’t seem too likely a few weeks back, did it?


STAGE 5: The race is on!
Really want to jump-start your motivation? That’s right, you. You can enter a race. Sure! Why not?

Don’t sign up for one happening this weekend. It shouldn’t be next weekend, either. It could be a month from now of 4 months or even a year, but start scouting. Pick a 5-K (which is near 3.1 miles) and get it on your calendar. You have to find some way to be accountable in your training. A few people are internally motivated, and that’s amazing. They set their minds to doing something and they do it. The rest of us need the carrot or the stick. Or both. We need someone or something watching over us, nagging us, cajoling us into being our best selves. Maybe we need the support of an anonymous online community offering encouragement.

Check to make sure at least 500 people enter your race, and if you can find one with north of 1,000 entrants, that’s even better. The more runners, the merrier. When you have a lot of people are you, you can guarantee someone will be slower than you. Someone will be walking the whole way. Because that’s the number-one fear of every person who enters a race for the first time: What if I’m last? Trust us. If you pick a big enough race and run even just a few minutes of it, you will not be last.

This is a pivotal week. What’s going on in this workout? Well, as you’re doing every week, you’re increasing the run segment And 5 minutes is a long time to run without stopping. This workout asks you to do that four times. So at the risk of sounding redundant, you’ll have to approach the run very slowly. You want to be able to get through all four running segments, you can’t go charging out of the gate for the first one and quit after two. Pace yourself. Also the walking portion decreases this week. If you’re pushing too hard during the 5 minutes of running, those 150 seconds of walking are going to feel like they’re over before you’ve had a chance to catch your breath. So keep the run controlled, really slow down on the walk, and see how it goes.

STAGE 6: A jog, not a sprint
For awhile—a long time, it seems—we only appreciate exercise when it’s over. We feel virtuous for having done it, and we’re glad we pushed ourselves out the door. Whew. Check that off the day’s to-do list. But there comes a point when the actual “during” portion of exercise isn’t so bad, either. You’re out there and you start running, and it feels much easier than you anticipated it would before you started. You feel like you’ve got a good stride going. In fact, it’s downright invigorating. It goes by quickly, and you’re sort of sorry it has to end. Not there yet? Trust me. It will happen.

You’ve probably heard people talking about endorphins causing the famous “runner’s high.” Scientists still debate the role of endorphins; some think anandamide, another chemical the body produces that the brain feasts on, might be the cause. Whatever the body chemistry reason, many people experience a sense of well-being during and after a run. For some it’s a mild sensation. For others it’s more intense.

With this workout you’re doing more than 20 minutes of running in each session. The walking is down to 12 minutes. Over last week and this week, the balance has completely shifted in favor of running. Give yourself some credit for how far you’ve come!

Now You’re Ready to Run Your Butt Off!


Here’s the thing: The more you run, the more weight you lose and the easier it is to… keep running. It’s hard to get the momentum going at first. But once you get on track, consistent, and committed to your workouts, the more calories you’ll shed and the less you’ll weigh. It takes effort to pick your feet up and run, and you can go longer. Then you’ll get a little faster, go a little farther, and torch even more calories. Plus your heart and lungs are better conditioned already. And when there’s less of you to move, they don’t have to work quite so hard. You feel better even though you’re doing more. It’s a happy circle.

Make your transformation into a runner complete.