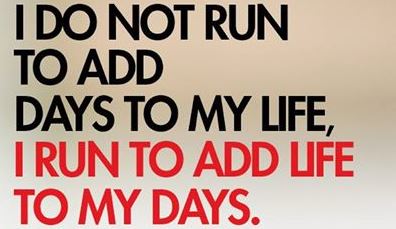 How did everyone start running?…Did an life event happen..and you just started running?…What is your favorite running quote?

Everyone at my work was talking about their experiences with running. I’ve always wanted to try running, I just didnt know how to start. My supervisor at the time mentioned the Couch to 5k program so I figured I would give it a shot. And I became hooked.


I wanted to lose the baby weight after my second kiddo so I signed up for a “learn to run” class and that was 5 years ago! I have since completed 7 half marathons and am training for my first full marathon!

My entire life fell apart and running was the only thing that took my mind off the drama. And it’s the only reason I’m still here in one piece. Running literally saved my life.

I was dating a guy who had lost 200 pounds (before I met him) and he was a runner. He kind of “forced” me into running but while he didn’t last, I got hooked on the benefits of running.

Loved running since grade school!…was in track and that high ..running is like no other! I will soon be 51….have a treadmill..but prefer Outdoorz!

I ran for a little bit about 9 years ago when I lost a lot of weight. Well I gained it back. This time around I’m doing everything different but knew I would run again. Before it was more like a chore. Now I’m hooked. I love it and it helps me stay in track with my eating!!! I’m 20 lbs away from a goal weight I never thought I could ever reach. I have running to thank for that. “Never Give Up” is my fav quote

For me…it’s “My Focus” for the day…No one else…just Mine….and of course..Always set your music to songs that you “get” n motivate you!

My friend asked me to run with her in a Mother’s Day run – 4km. I couldn’t even run 200m at that point! So I trained, run a bit, walk a bit then she got injured and I ran it anyway. Haven’t really stopped lol Have ran 2 half marathons and hoping to do a full this year

I played softball growing up and blew my ankle out to the point where i couldnt run. I used to hate running…until I couldnt do it!!! I had ankle surgery in 05 and was in a boot for 3 monthes. After PT i started jogging to get back in shape and started to find it relaxing and a good way to destress. started as treadmilll then started running the lake. Now i run for my grandpa who passed to cancer and i run with Team in Training!!

5 years ago I was 130kg and got bands from driven, dint really care about my self much then, but I had to bike to work for 2 years (7 miles a day) so I started to get fitter, then it started off as a bit of a joke that I should do a 5 k run for charity, so I took the challenge and never looked back since, 2ed of March this year I completed a 1/2 marathon in 2:27……. 5 years ago I wouldn’t of even been able to bike that, believe in your self is what I say

I have had arthritis in my knees starting when I was 17. By 31 years old (last year), it had developed to the point where my knees were so stiff and painful, I couldn’t get off of the couch or get up from the floor without my husband helping me and with excruciating pain. I had started running to work my joints and I was practically pain free about only 5 months in and no longer needed my husband’s help. It literally changed the quality of my life.

I played sports my whole life but never understood my cross country runner friends. College started, sports stopped…had to do something to stay active. Figured running would give me the biggest bang for my buck. Friend talked me into a 5k…then 10k…then a half. Been hooked ever since!

Start running back in 2008 my first 8k no training or any idea what I sign for it lol, I just did it because was a fundraiser, after see how people was so excited and motivate on running I keep looking for more 5K around town have my last baby 2/2011 (180lb) after baby and I went back running in 9/2011 lost all the pregnancy fat and now (125lb) my first full marathon was 10/2013 I will be running my 4th full marathon 10/2014 I’m addicted and I’m glad to have a healthy addiction!

Friend of mine was doing the Warrior Dash….sounded like fun.So I thought I better get in shape if I wanted to run it too. Ran a 5k first to see what kinda shape I was in….been hooked ever since! (4years ago)


I started running soon after my husband filed for divorce. It has helped me manage through so many painful emotions and bitterness.
I am finally taking care of me after 16 yrs of marriage and can honestly say despite the chaos of divorce I am the happiest and healthiest I have ever been my entire adult life. Running has changed my life! After 6 mos if training I will run my first half and first race ever May 18th. I am ready! Life is so good and it will get better!

I stared running the day I quit smoking cold turkey in 1994. I could not run a 1/10th of a mile. My first race was a full marathon 2 years later!

Need to improve aerobic capacity for my passion sport…dragon boating!

My friends said they were doing a color run last August. In three weeks I am running my first half.

I started getting serious about taking care of myself 15 years ago. In 2006 I went to a fitness boot camp and we ran there. In 2007 I lost my aunt and went through a relationship break up and decided to train for a local 10K in April of 2008. I got hooked on racing. I have done over 112 races since 2008. I have done 8 half marathon and tons of of 5Ks and 10Ks. I love to run even though I’m slow.

When I turned 50 I thought that I had better start taking better care of myself and began casually jogging. Then 2 years later I found out that someone very close to me had Stage 4 cancer and a month later was laid off by the company that I was employed by for 20 years. During the 14 months that I was unemployed, I started seriously training and ran 2 1/2 marathons. Today, my loved one is still alive and fighting, I have a new job and I am registered for 3 1/2 marathons next winter! I believe that running helped me get through some really hard times and now, after running a 1/2 marathon at 53, I know that I can do anything!

6 of us ladies decided to run the Chicago 1/2 marathon in2010,no running experience at all. We trained all on our own and all finished under 3 hrs! Then I started doing 5ks every month to keep it up. 2013 did the ING MIAMI 1/2 marathon and pbd! I’m hiking, biking -your de Palm Springs 25-50 miles , a Duathlon and traing for a triathlon now! My 57 yr old self could kick my 23 yr olds self butt, never felt better than I have in my fifties!!

It was literally the only exercise available to me. No gym around. Love it now. Fave quote “never judge a run by the first mile”