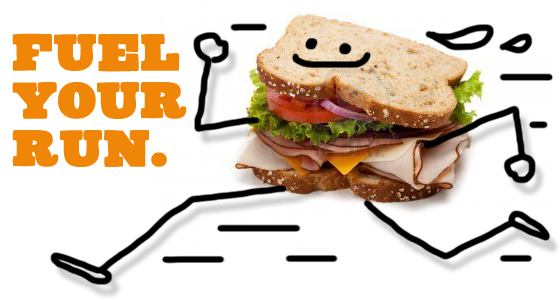 Ok running friends. I am thinking of waking up early and getting my run done in the am. question….how do you fuel for an early am run??


Since my morning runs usually are only 30-45 minutes long, I just have a piece of toast with PB

A banana and some peanut butter is usually enough

I usually eat a bowl of oatmeal

Depending on the distance-nothing for under 5 miles. Longer runs-body builder protein bar.

I usually don’t need anything for runs under an hour. Probably should, but I don’t find I NEED it. If i do eat something, just need something light that sits well. Like bagel with peanut butter.

I am best with water because it’s early and I do best on empty stomach unless more than 8 miles. Then Oatmeal is my favorite. Everyone is different.

Nothing for under 5 miles. Banana or PB toast and a glass of water for 6-10.

Agree with the others. Nothing for under 5-8 miles. PB toast or a bar for longer but do best on empty stomach

Oatmeal when I get back

I get side cramps if I eat right before a run. So I MIGHT choke down half a banana and a small cup of coffee. That’s about all I can handle that early in the morning

I have to eat not matter what mileage I am going to run, if I don’t I peter out! As soon as I get up I start drinking water and eat a bagel or eggo with peanut butter, go get dressed, then eat a banana right before I head out.

I run empty unless I’m running more than 20miles. I find it works best for me, I chew gum while I’m running but everyone is different…

1/2 banana for runs under an hour, full banana plus PB for longer runs

I am up and working out at 0420 M-F.. I do not eat before my workouts.. a sip of water nothing else….Trial and error.. you’ll figure out what works best for you.

A nutella and honey sandwich.

I just do a banana and bottle of water


I’m hypoglycemic, I get up at least an hour before to eat either toast with peanut butter or a couple tablespoons oatmeal. With a cup of coffee. You do not want to eat too much before you run and if you eat plenty at dinner, you shouldn’t have to eat early am.

I love running in the morning. It’s when I have the most energy

I have eggs afterwards. I’m starving by the time I get a shower!

I don’t eat before, I eat after.

I usually eat a peanutbutter and honey sandwich after

Drink about 8 oz of water and out the door for me.

Oh ok. I’m not a fan of bananas, but I’m noticing it’s what a lot of people turn too. May have to sick it up and eat at least half of one before a run. Thanks guys

Bananas have potassium, which helps prevent muscle cramping. Apricots and avocados are high potassium as well

If it’s just a typical, regular mileage run, I don’t fuel, rather I eat after. Even before a marathon, I still eat light –banana, slice of toast with peanut butter, and a glass of milk.

I seem to be different from everyone. I like morning runs but don’t eat or drink anything. It just sloshes in my stomach and I end up with stomach or side pain and it greatly hinders my run. I’ve tried different things and I just do best with nothing before. Do what works for you!

I usually don’t have anything but I just can’t help but wonder if on long runs if I would benefit more. By long runs I mean anything over 6 miles.

Probably would I just can’t seem to get it to work for me. I do gels or chews during long runs. Very little water if any when I run. Again it just sloshes in my stomach.


I was the person that couldn’t eat anything, then I realized I do much better if I get up early enough to get 1/2 a banana in me. Since its not that much food, I do fuel with protein after my shower.:) just play with it until you figure out what works for you. Everyone is diff. Don’t eat something you don’t like, find something you like that will work for you.:)