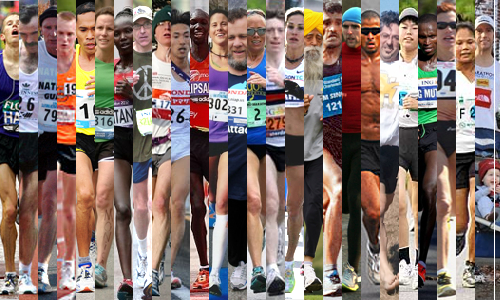 I’ve done one half Marathon and have five more planned this year. At what point are you a marathoner? When you do a full?

According to my family I am already even though my furthest is 10k. You’re a marathoner in their eyes! Lol


Personally believe when you do a full. I do not think I will ever be one lol

Technically, yes … you can’t call yourself a marathoner unless you’ve done the full 26.2. I’ve done a lot of halfs but … I don’t consider myself a marathoner. Distance runner, yes. Half marathoner, yes. Marathoner, no. When people say stuff like “I can’t believe you run marathons!” … I’m quick to correct them. I don’t take that credit.

Yes. A full. Right now I’m a half marathoner.

I did a marathon back in 1986, and since have ran only half marathons, many of them…….I do not consider myself a marathoner, but my marathoner friends strongly differ with me on the issue and say that I did the distance once, so I am a marathoner…..what do they know ??? I have the 13.1 sticker on my vehicle, and wouldn’t feel right with the 26.2 !! Proud to be a half-assed runner !!!!

I agree … I think that you have to do something more than once to really earn that badge.
12 hours ago · Like

When you crossed that finish line of your first half!!!!!! Isn’t it a great feeling? Congrats marathoner!

Actually, when people say, “You’re a marathoner, right?” I usually say, “I’ve run one, but I run other distances too.” In my mind though, I consider myself a marathoner because I know I plan to do more. To the world though…I’m somewhat humble. Also, I’ve found that although folks are impressed by the fact that I’ve run a marathon, many think that’s unattainable…I like to talk about other distances and the fact that I didn’t start out running marathons, so non-runners know there is more to it than 26.2.


I believe putting in the time and effort and running your first half earns you the right. Sweat, hard work and dedication comes in all forms that’s why they still call a half a marathon.

I say that we are all runners. I think a “marathoner” is someone who runs fulls. Not a bad thing… Just like I’ve done triathlons, but not an ironman… So I’m a “triathlete, but not an a ironman”

I also consider myself a tri athlete. I have only done sprint tris, and have NO desire to do full ones, but it is all the same, just the distance.

Similar question: at what point do u think you’re ready to do a full? How many halves? Training run distances? When do u take the leap and sign up for your first full?

I love doing halves. Want to do a full at least once. Was training for a full last summer until surgery put a damper on it.

If you’ve ran a half, you can prob train for a full. Just 5-6 months of training from half to full. Most training programs start between 5-7 mile long runs.

For me it’s mental. I love my half marathons, haven’t wrapped my mind around a full yet…

I’m with you, I am not quite ready to tackle a full, I have completed 2 halts, and have 3 more planned. Maybe next year.