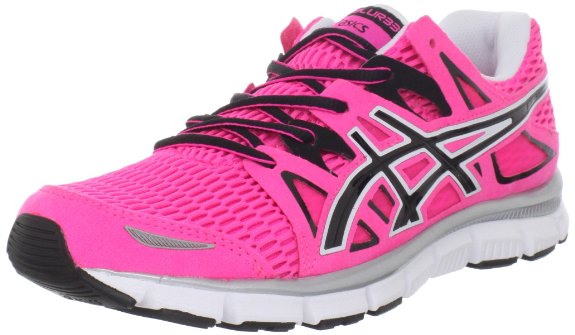 My podiatrist suggest I stop running in my Nike Frees with the foot issues I’ve been battling. She asked if I had ever run in Asics. Besides Nikes, I have only ran in Brooks Ghost 6 and haven’t been incredibly impressed with those. I need a neutral shoe. Anyone have a specific style of Asics they adore?


I love all my Asics. I am Duomax on now and I have Gel-flux running shoe at home. That is all I have ever run in were Asics and have had minimal knee/foot trouble. I like the Duomax better.

I LOOOOOOVED my gel platinums!! they were my FAVE!!! Carried me through a lot of runs!

I run in Kayano’s but they are stabilizing. Is there a running store near you who could fit you in a proper shoe?

There are a couple different running specialty stores here…one of them suggested the Brooks, which I have put about a 100 miles on, but I don’t love them. I want to feel about a shoe the way you guys do!

My first serious running shoes is Asics gel nimbus 15. I switched from Nike free 4.0 since I started feeling pain in my ankle and shin splints. I’ve also increased my miles. I’m a neutral runner so I’m loving my nimbus!!!

Asics Nimbus have been my go to shoe for 4 years, but you have to find the ones that are good for you. Go try a bunch on!

I used to run in ASICS, major foot troubles, switched to brooks better, trying Muzunos I hear the are great. Try runnersworld.com and take the quiz they offer different brands that fit your needs.

I’m an ASICS guy. I’ve liked nearly every pair of ASICS I’ve owned and I put a lot of miles on them. I’m a mild over-pronator so I wear a stability shoe. I’ve worn the GT-2000 series, the DS Trainer series as well as the Neo-33 and J33. I got convinced once to try the Saucony Grid series and I hated them. Of course, everyone’s anatomy is different so what works for me might not work for you.

Asics Cumulus for me too – been running in them for about 4 years now. I don’t even get fitted anymore, just purchase a few pairs of last years models when the new model goes on sale.

love the gel nimbus or the gel cumulus. they are basically the same shoe. I started my running journey in Nikes and had issues so I switched to Asics and have stuck with them ever since. I have tried some other styles of Asics but they did not work for me so I stick with what works. when I first bought them I went a half size larger and was fine. last year they changed the toe box and now I have to go a full size larger. thankfully where I buy them offers a 20 day test run so I was able to exchange them when I realized the shoe had changed. good luck!

If you need a neutral ASICS shoe try the Nimbus, Cumulus, or the Gel Trainer. I personally love the Gel Kinsei 5!

I like Mizunos also, make sure you get them most neutral shoe they carry. Also love Newton Shoes, but they wear out quickly so I save them for races.

After doing research, I just went with a list of shoes to try and ran around the store in each pair. Sometimes comparing different shoes on each foot as I ran. (Previous shoes – Kayano’s had given me knee issues, the Nimbus felt great but were too narrow, wouldn’t loosen up:) Now I’m into Brooks Ravenna, hoping not to be disappointed, although an arch support will need to be added.

Asics don’t have a big enough toe box for me, I run Nike Pegasus.

Hoka’s (Clifton) I have been running for 14 years and these are the best for me. Running store in Manteo.

Try Altras. They’re zero drop, most are neutral, but they have various levels of cushioning. Love mine!

I love my Asics GT 2000’s! And I am a former Nike Frees wearer who had foot problems as well! I didn’t even have to break them in!

Saucony’s Ride is a great support shoe. I won’t run in anything else.